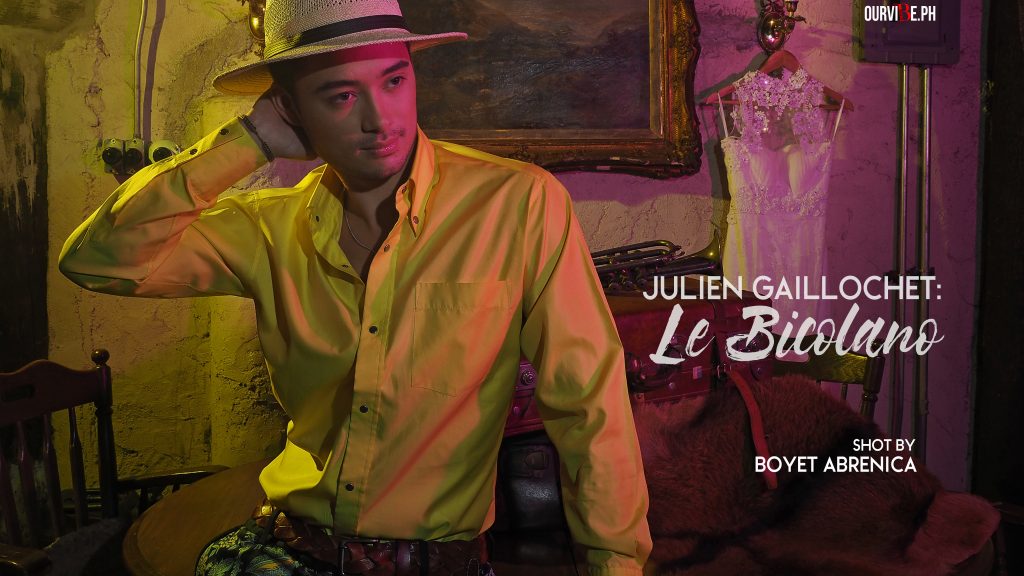 There wasn’t any sign of the rain except the burning sunlight that lit up the lobby of The Carmen hotel, where Julien stayed for a couple of days for a brandevent. An hour of grooming and twenty minutes’ drive time later, we honked into the gates of Mango Rancho.

In local weddingphotographyspeak, Randall Dagooc’s Midwest macho space in the highlands is popular for prenup shoots, though this time we’re shaking that out of our heads for a menswear editorial.  We aren’t expecting grandeur: the roads leading there told us so. Had this piece been a feature for a design magazine and we knew nothing of its inhabitant, we’d describe him as a cross between Sean Penn (in the Secret Life Of Walter Mitty) as a National Geographic photographer and pre-Vogue Inglorious Basterds.

But really, this story is about a man. A man who happens to be the perfect guy to describe the adventure that is in this place. We first came across Julien ushering guests at a Best Of Bicol event in Manila with his sister Melanie(who by the way looks like Lea Seydoux) and when the Miss Universe 2017 cameras pans twice to where he was seated, focusing on him, we held on to our phones and searched for his Instagram account. There it was: his name is @butanding.

We immediately messaged him for an interview because hello, Bicol. Move over, Erwan.

Paolo: You’ve come a long way from Paris. We know your Mom’s a Davaoena, and your Dad’s French. Besides us knowing Paris from thousands of films and millions of photographs, what’s it like in Paris?

Julien: Paris is definitely the most beautiful city in the world. Its history, its monuments and its many parks makes it very pleasant for those who wish to discover a new culture by foot. Bonus: There is no traffic!

P:Because really, we would kill to have no heavy traffic here. But surprisingly, people still go to the Philippines to travel. When was your first trip to Bicol?

J:It was in 2008. My French cousin Jean was visiting the Philippines with us, and we wanted him to discover our beautiful landscape.

P: I wouldn’t ask you to list down where you went here but what were the highlights?

J:Well, we went to the Camsur Watersports Complex, Mayon Volcano, and saw the Butandings in Sorsogon. The real highlight was getting to do all of these with my family.

P: We’re obssessing about how you were able to get hold of the IG handle @butanding. For anyone, getting that name at that time would be a feat—if it’s too late you could have ended with @butanding1 or something like that. It seemed providential; can you tell us more about it?

J: Well what an adventure! It took us TWODAYS to see one! We were so disappointed the first day that we decided to stay overnight in Sorsogon. There were eleven of us in one room close to the beach and there was only one bed! But it was really fun! The next day it was worth it: we were able to see so many butandings! It was memorable because of the whole context. Hence the name.

P: That’s an insanely good story to tell over and over to people asking about your Instagram account! We’re happy you’re here every chance you get. Are there any similarities between Parisienne living and provincial living in Bicol?

J: Not really. Life is really simpler in Bicol, and the Philippines in general. People take time to do what they have to do, and are far less fancy. The total opposite of folks from Paris.

P: That’s true actually. We’ve seen a lot of developments locally that make Bicol truly world-class in terms of heritage, culture, dining, and the arts. To a friend perhaps from another country, how would you describe Bicol?

J: I would definitely show him/her how authentic Bicol is on many levels. Like French regions, Bicol has a deep history entwined with stories, beautiful, rich landscapes and culinary specialities. I would try (hopefully I succeed!) to cook him/her Laing to persuade him/her to come here haha. An easy feat, by the way—the French love vegetables.

P: That’s kind of a fresh fact—we’ve always associated the French with champagne and pastry, and wine of course. But I think there’s a special place for Laing  in there, too. Speaking of a special, you’ve earned quite a special place within a Queer Pinoy audience because of a post from a famous Facebook page after appearing on TV during the Miss Universe 2017 pageant held in Manila. It had a good timing because Ms. France won too. How do you feel about it?

J: I was really surprised about how passionate the Filipinos were!  I think that this unexpected appearance is actually a great opportunity for me. I just recently settled in the Philippines, and this kind of exposure might help me in the future. I want to thank all these people who saw something in me. I am really grateful, and I will not deceive them!

P: I remembered us laughing together while reading the comments thread! You’ve mentioned outside this interview that your family intend to live here for retirement. If you were to settle to a life here in Bicol (well, perhaps travelling back and forth to the big city that is Manila), what would be potentially your career here and why?

J: I am a huge football fan, and one of my dreams is really to acquire a football team. So why not in Bicol?

P: Last question—if given a rather distinct Filipino name, what would you want to have and why?

J: I would stay with ‘Santos,’ because it is an honour to have my Mother’s family name. Paired with ‘Gaillochet,’ it’s just perfect! It sounds Frinoy!

For more about our man of the hour, follow him on Instagram here. Want to see what happened behind the camera? More here.

Virgo, Bicolano, and a Brand/Marketing Professional. He is also the co-editor of the anthology Bikol Bakla: Anthology of Bikolnon Gay, Trans, Queer Writing.